The village of Qrendi was declared as a parish by the Maltese Bishop Baldassare Cagliares in 1618.  Before this date, the people of Qrendi and two other small hamlets of Hal Manin and Hal Lew, had to attend religious worship in the near parish of Zurrieq.

In 1620, Fr. John Mary Camilleri, decided to build a parish church on the highest site in the village, where two other small chapels had previously stood.  The building was completed in 1655.  In 1677 Fr. Domenic Formosa became parish priest and decided to pull down the recently finished church and instead build a bigger one.  The work began in 1685 and was terminated in 1712.

The plan of the new church was the work of the distinguished Maltese architect Lorenzo Gafa’.  The cruciform style of the church is characterised by the dome and twin church towers on the outside.

The transepts and the two side sacristies, with the choir and the main altar in the middle, form the arms of the cross.

Up to the early 50’s the floor of the church was covered with stone slabs which covered the tombs of the village people. But on the completion of the cemetery, these slabs were removed and the floor was covered with marble brought over from Italy.  This work was under the supervision of the Italian craftsman Edoardo Lombardi and was inaugurated on the feast of Corpur Christi in 1955.  The design of this pavement was the work of the Maltese craftsman Emanuel Buhagiar. 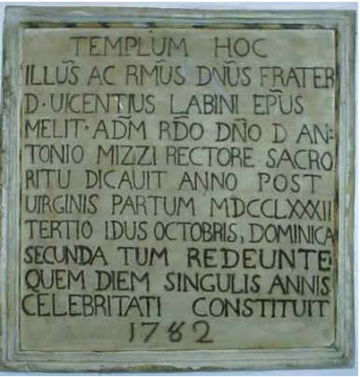 Although the construction of the building was completed in 1712, the church was consecrated 70 years later on the 13 October 1782 by Bishop Labini.

Two of the four bells in the bellfry were there in 1712 to celebrate the completion of the church.  The other two were later additions, one in 1788 and the other in 1798, during the time when Fr. Antonio Mizzi was parish priest.

In the year 1882, on the initiative of a local priest, Fr. Celestino Camilleri, who was alsa a botanist, the remains of St. Celestino were brought over from Rome and placed in the choir behind the main altar.

Since the completion of the church, distinguished local artists and fine craftsman contributed in many ways to adorn this beautiful church.  The Titular painting, representing the Assumption of Our Lady, at the back of the main altar, is the work of the eminent Maltese artist, Giuseppe Cali’.  This painting in oil on canvas and measuring 378 cm by 196 cm, was made in 1919 when Cali’ was nearly 70 years old.

Cali’s painting replaced the one that another Maltese artist, Rokku Buhagiar, had painted for the first church and which is now hanging in the right sacristy.

The Maltese craftsman Emmanuel Buhagiar was also assigned the design of the highly decorated frames of the 14 stations of the Cross and also the Lectern. 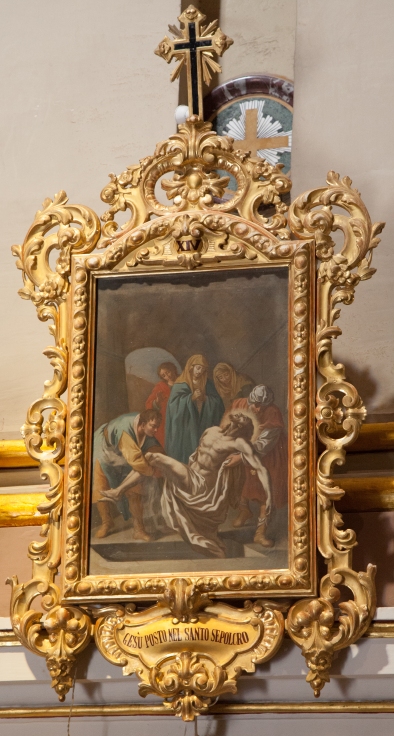 A very recent piece of history is painted on the main door of the church.  The Convoy of Santa Maria. This is the work of the Gozitan artist, Paul Camilleri Cauchi. This painting represents the arrival of the damaged tanker Ohio, in the Grand Harbour.  This was the only vessel to survive the enemy attacks out of a fleet sent with aid to Malta.  The Ohio arrived on the 15 August 1942.

The statue of the Assumption of Our Lady, better known as Santa Marija, is carved out of wood and was made in 1840 by the Maltese sculpture, Antonio Chircop.

Up till then, a 16th century statue of the Immaculate Conception, brought over from Cospicua by the then parish priest Antonio Mizzi, was used for the procession on the feast of the Assumption in Qrendi.  The feast of Santa Marija is celebrated on the 15 August. 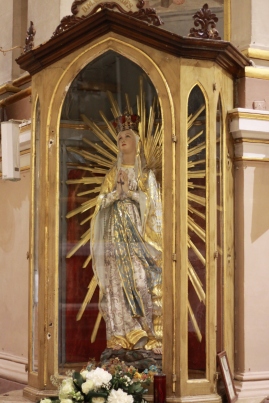 The feast is celebrated on the last Sunday in June.

This altar in the left transept is dedicated to Our Lady of the Holy Rosary.  The painting resembles the work of Giannikol Buhagiar, an 18th century artist.

The other altar in the left transept is dedicated to Our Lady of Mt. Carmel.  The painting is of an unknown artist.  This altar is adorned with a very nice prospective of sculpture showing angels around this painting. 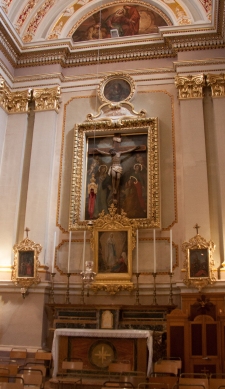 This altar in the right transept is dedicated to the Agony of Our Lord Jesus Christ.  The painting is of an unknown artist and it has a large cross hanging on it.  The altar is also dedicated to Our Lady of Lourdes.

This other altar in the right transept is dedicated to Pentecost. The painting, which is of an unknown artist, represents the descent of the Holy Spirit. This altar is adorned with beautiful sculpture of the 18th century Baroque style.

This altar is dedicated to Our Lady of Consolation.  The painting is the work of Ramiro Cali’, son of Giuseppe Cali’.  The painting was paid by Fr. Gwann Callus.

This altar is dedicated to St. Stephen.  The painting is the work of Stefano Erardi in 1677, which he painted in thanksgiving at the end of the 1675/1676 plague which claimed a good number of lives in the village.  This painting shows Archangels St. Michael and St. Gabriel with St. Stephen, St. Anne and St. Rosa of Lima. 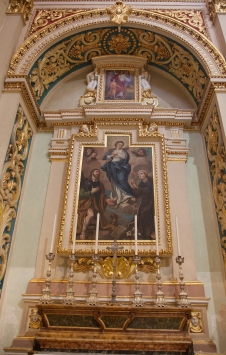 This altar is dedicated to the Conception of Our Lady.  The painting is the work of Stefano Erardi and it shows Our Lady with St. Roque and St. Rosalia.  It is understood that this painting was also made as thanksgiving at the end of the plague.

This altar is dedicated to St. Paul.  The painting is the work of Francesco Zahra and shows St. John the Baptist, St. John the Evangelist, St. Paul, St. Catherine, St. Lucia and St. Nicholas.

This is the only existing painting by Giuseppe Calleja which is found in the main pillar facing the altar.  This painting configures Faith and is known as “Fides ex Auditu”

Giuseppe Calleja, born on the 12 December 1828, was a fine artist and has many paintings in various churches around the island.

The parish church of Qrendi had the privilage of having a  painting of the Prophet David on the ceiling in the choir, which was later restored by Chev. Raffael Bonnici Cali’ in 1948.

Unfortunately this painting was replaced by another painting in 1973.

The painting of St. Philip Neri was donated by Giuseppe Calleja to the church of Qrendi in 1873, upon the completion of the paintings in this church.  This painting is still hanging in the small chapel in the sacristy.

On the four main columns which hold the dome of this church are painted the Biblical figures of Rut, Rakel, Abigail and Sefora.  These paintings are the work of the Gozitan artist, Paul Camilleri Cauchi. 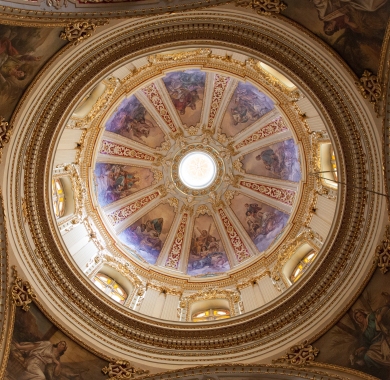 The eight paintings in this magnificent dome show different episodes in the life of Our Lady.  Paintings by Paul Camilleri Cauchi in 1971. 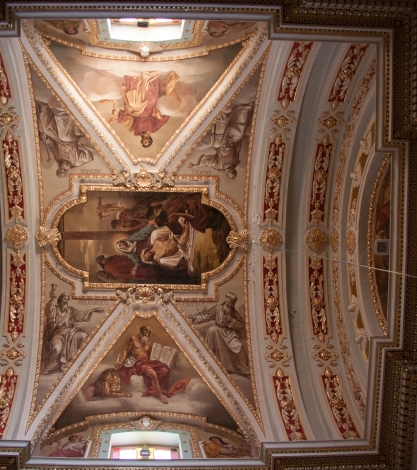 A beautiful 1973 painting by Paul Camilleri Cauchi on the ceiling in the choir.

The 18th century Napolitan pipe organ was built in 1778 and is of the “Positivo” style.  When this organ was examined by experts in 1998 it was found to be in a bad shape.  So it was decided that restoration works will be carried out. 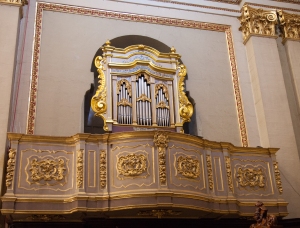 This work of restoration was done by Mr. Silvio Pace (decorations), Mr. Tony Bartolo (woodwork) and Mr. Robert Buhagiar (pipes and  electrical motor system and also wind (manual) system).  All this work was finished in 2001 and was inaugurated on the 22 November 2001 with a concert under the patronage of the President of the Republic of Malta, Prof Guido Demarco.